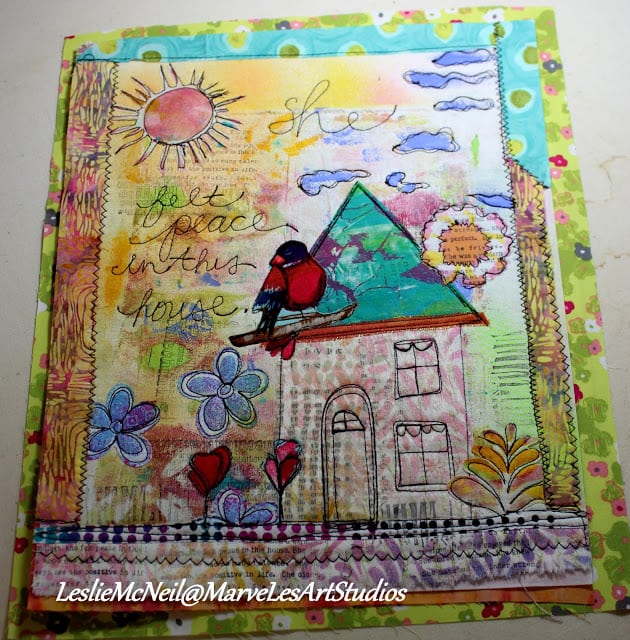 finally ~ as promised ~ my faux piping tutorial.  i’ve been working on the writing all week {written in the fog of a nasty head cold} so let me know if it seems strange in any way?!!   lol!

this is a step-by-step process of a finishing technique on my smaller art collage-journal quilts.  i call it ‘faux piping.’  while i haven’t seen it anywhere else, i’m sure it’s not a new thing.  i discovered it rather accidentally as i was ironing a small quilt from the back, when i flipped it over, i  saw it looked like ‘faux piping’ and  i really liked the effect.

i finally got back to finishing up my first little house quilt over the long weekend, initially posted here, and it’s shown below in most of these tutorial photos. i’ll show detail photos and share more about the finishing details in another post.

in the photo below i’m showing the quilt top, and the fabric under it which will become the ‘faux piping’ ~ that’s the green floral print on the bottom. i chose this print because it looks like the kind of sweet feeling & organic background as i see in my own neighborhood when i look down our street.  and i like the color story, too, picking up on the lime green, yellow, and pinks in the main piece, as well as a bit of gray blue in that print.

to begin, cut your ‘piping’ fabric to roughly 1″ larger {or not ~ i eyeballed this} on all sides 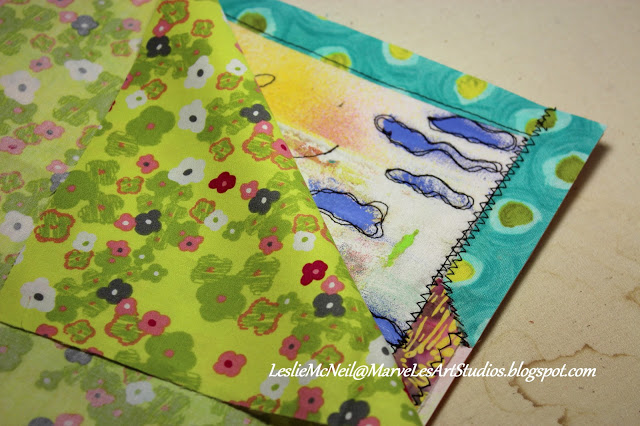 with right sides together, stitch around the entire perimeter, allowing a 1/4″ to 3/8″ seam or so.  i judge this according to how i want the outside perimeter to look.  you could make it square, but i find there won’t be as much ‘piping’ to show. the more curvy you cut your outside dimension, the more ‘piping’ look you will be able to achieve.  this one i kept mostly square, as i felt i suited the piece … so essentially i approach this process pretty loose… {i know ~ surprise, huh?!} 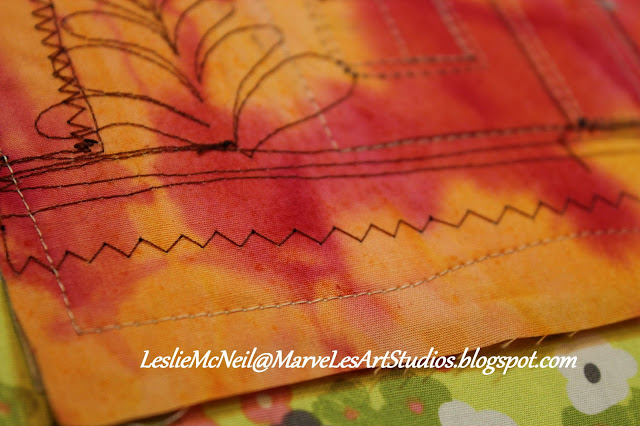 once i’m done with stitching that part, i cut a large opening in the back… the cut i make goes from top to bottom, and {sometimes} i also cut a couple that are horizontal, depending on how much stretch i’m achieving. of course, i could get more stretch if i cut the backing fabric on the bias, too.  {but i don’t usually do that} 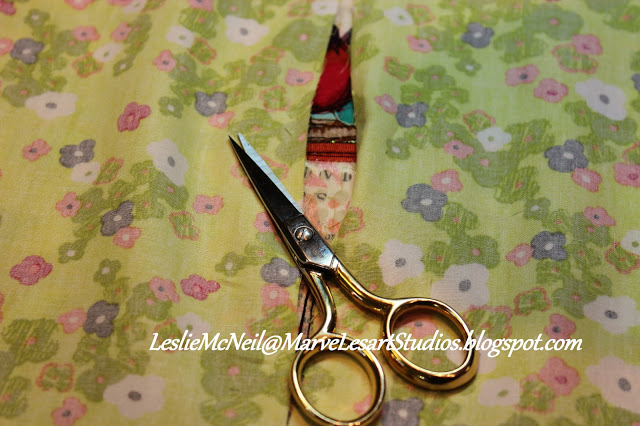 i am rather picky about trimming my corners.  this is important in order to achieve a neatly turned corner; one that will look really nice and finished {see below} 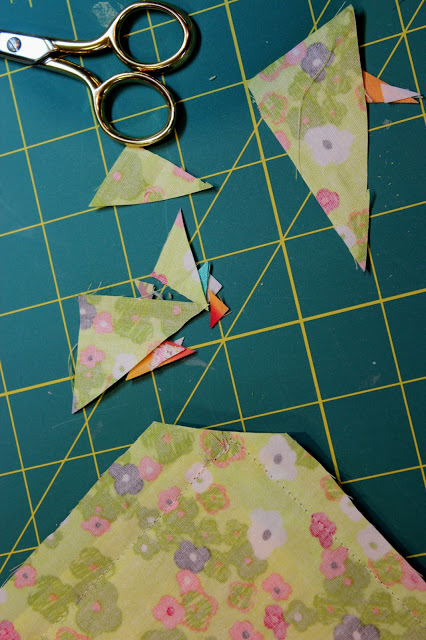 then {gently} turn your  fabrics so the right side is out.  my quilt is fairly stiff, due to the interfacing i used to stabilize it for quilting, so i took my time.  a note about batting and stabilizer:  i use a thinner, fused batting on these small quilts, and add a layer or two of stiff interfacing, as well, so they quilt up really easy, and i can add heavy stitching if i decide to later, without fear of puckering or warping the fabric. {and they hang nicely too} 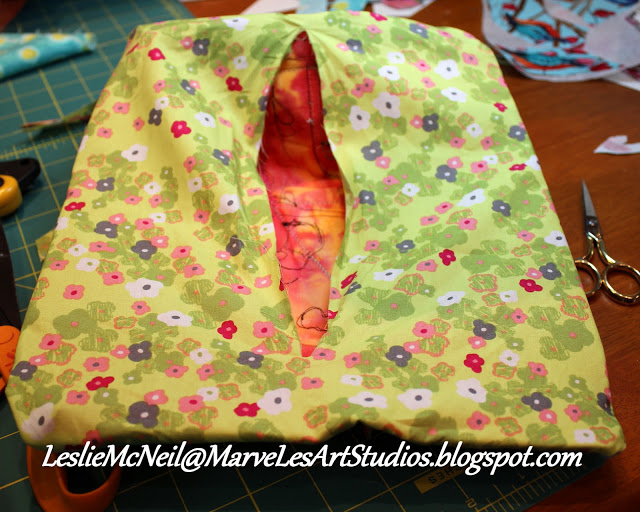 my favorite ‘turning’ tool is a four-in-one tool, containing a point, a seam ripper, presser and an awl, designed by alex anderson.  i purchased it at my local quilt shop.  i actually have two; the smaller one i’ve had for 10+ years, works just as well {both shown below}. 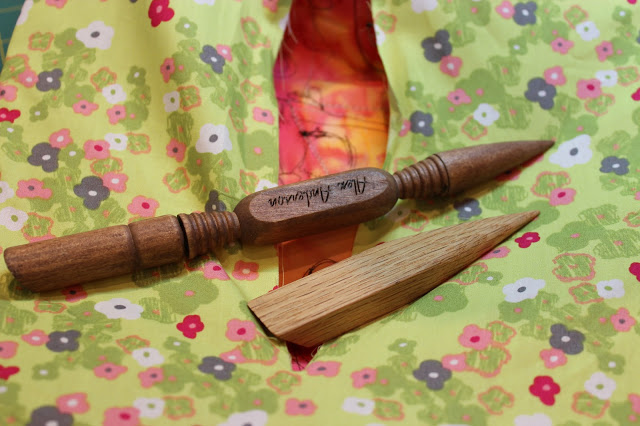 take your time!  be careful not to push too hard, or you will push your seam right out of the corner. 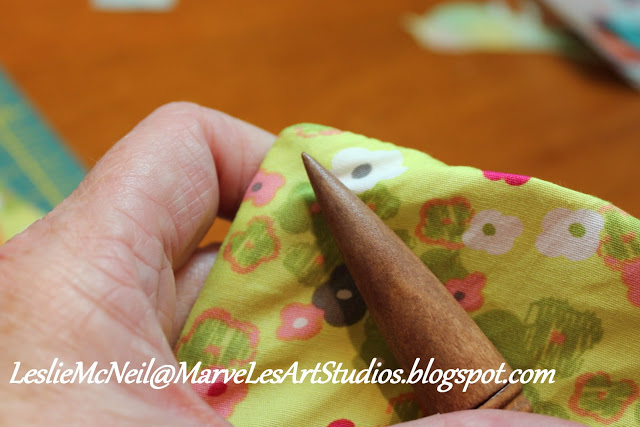 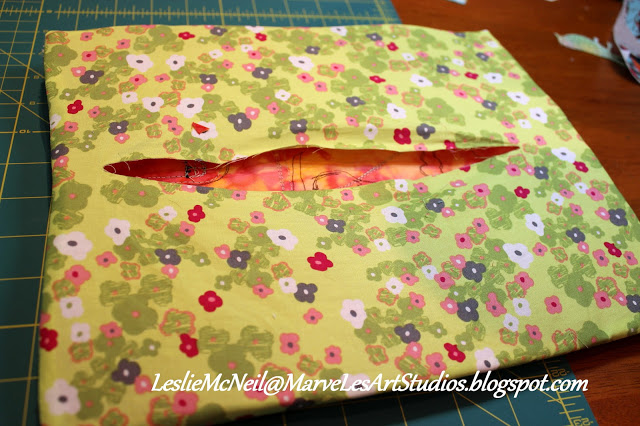 all done with that step. my corners look just as i like them to look!  neat and tidy.  now it’s time to press. 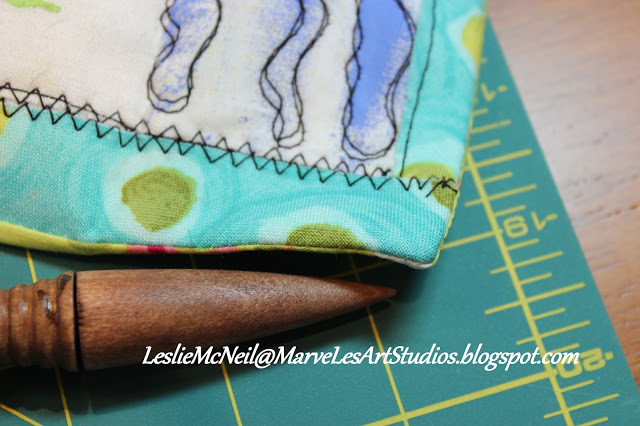 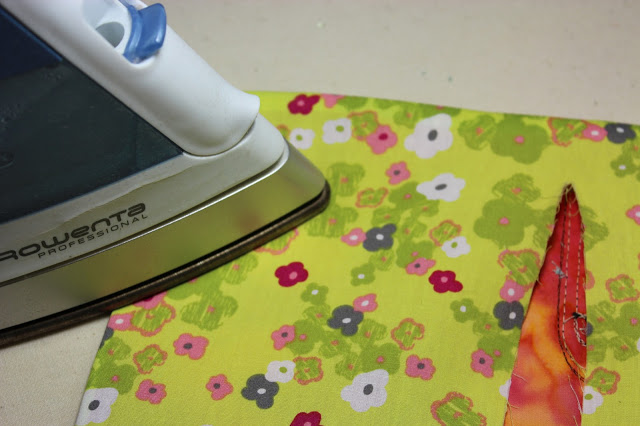 i made some extra cuts to the original slash, just to give me a tiny bit more ease in which to push the fabric to the sides of the quilt.  i don’t want to trim it all away, as i lose the ‘controllability’ of the stretch.  {hope that makes sense}. 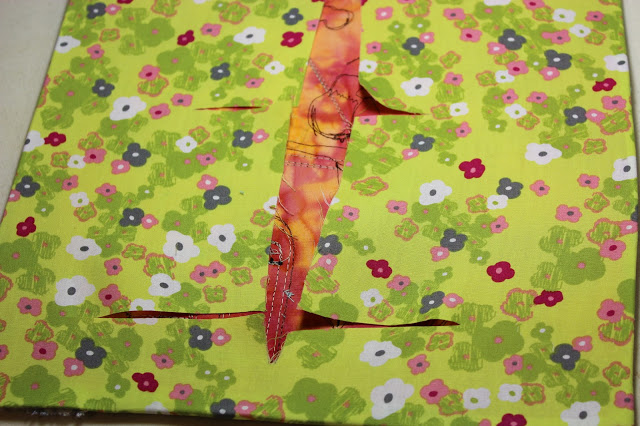 this process will allow more stretch if you have curvy edges cut too.  this piece happens to be cut a bit more ‘square.’ below, you can see where i pushed the fabric toward the bottom edge ~ so there’s just a tiny little bit of ‘piping’ that’s showing. straight of grain {or not} will change this up somewhat. 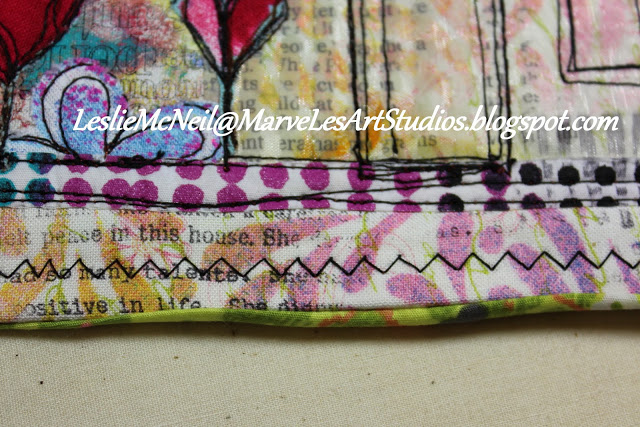 now i will give everything a really good pressing again, {this is just the opposite of how you would press a normal pieced seam}, pushing and pulling where i want that fabric to show to the front.  then i take it to the machine, and stitch in the ditch of the faux piping-binding. i used a coordinated thread color, and love using my bernina #20D open toe foot. 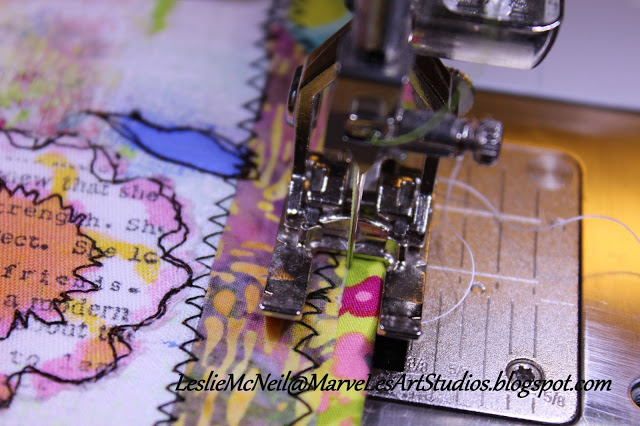 the photo below shows the stitching in the ditch, completed, and i did this all the way around the quilt. i like how it keeps the whole piece nice and flat.  note: i don’t always do this – it just depends on the quilt, & what i might want to still consider adding, in the way of more quilting embellishment, etc. 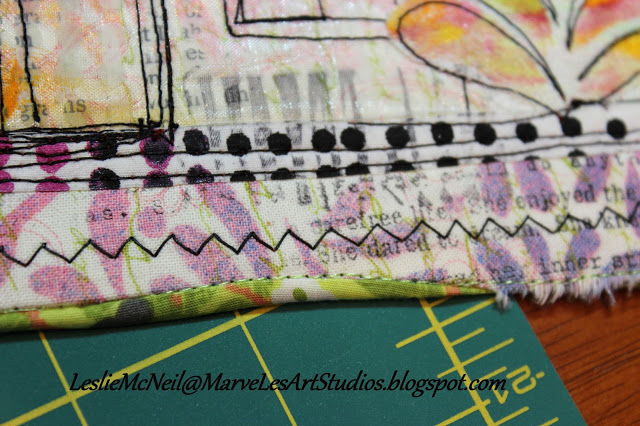 and this is what it looks like from the front top edge: 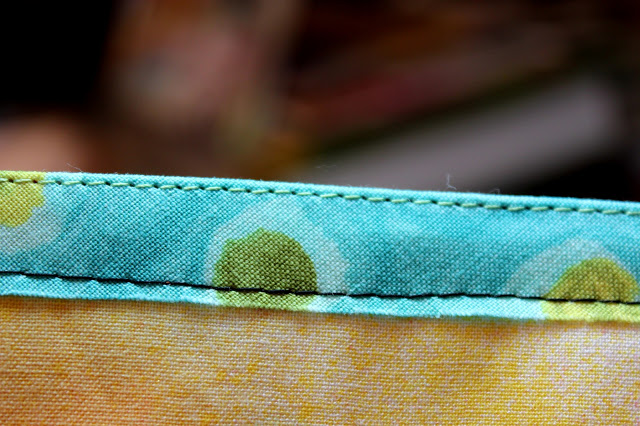 and again, just another look at it from a corner view: 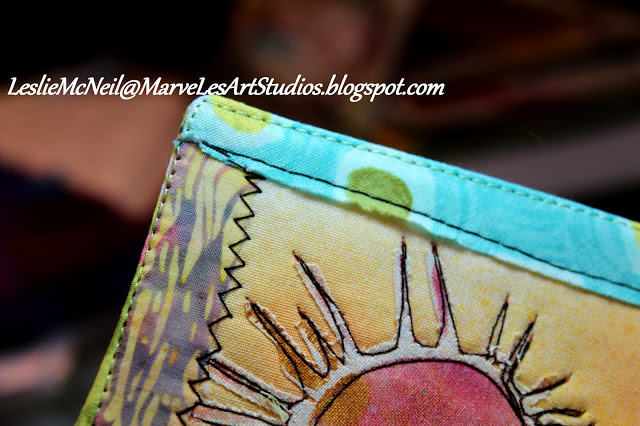 in this particular case, next, i trim away the excess fabric {nice for the scrap pile ya know} but i don’t always. 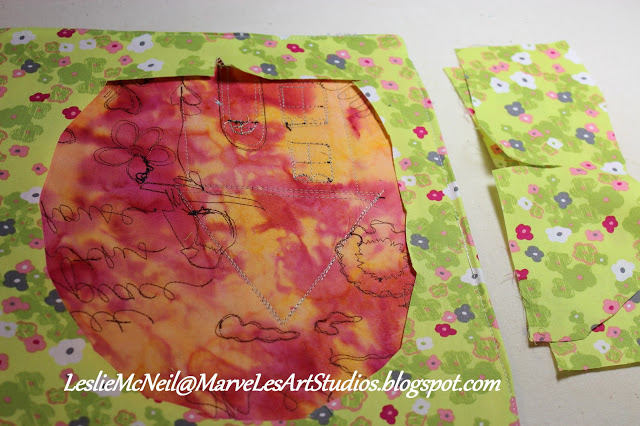 and to cover up that gaping hole i use another piece of fabric that has been fused to steam-a-seam; which will act as the final piece of backing fabric, which also adds a bit more stability for hanging it. 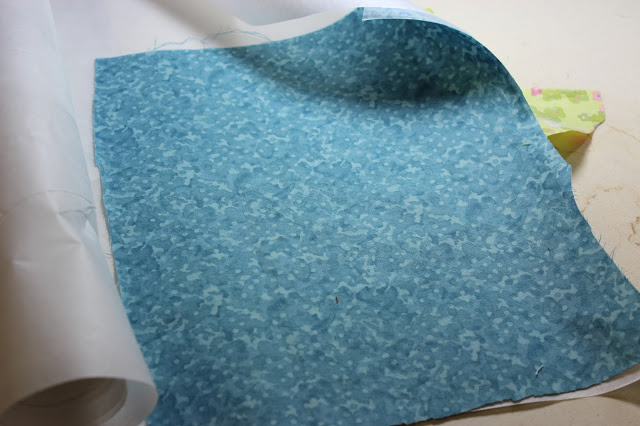 after fusing, it’s cut to fit the backside more precisely. and then i write the title, date and dimensions, signing it with a permanent marker: 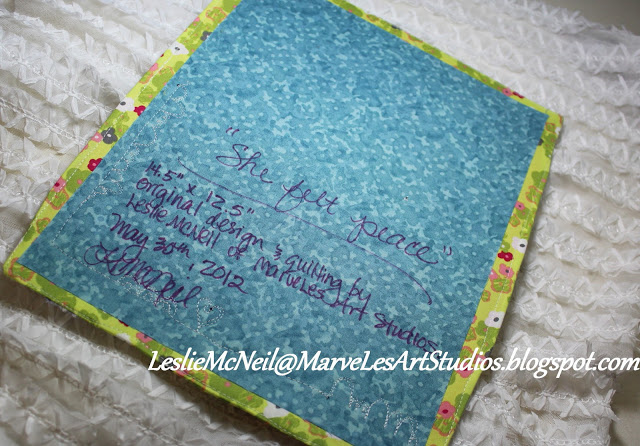 i don’t always have a big slash to cover up; sometimes it’s smaller, and i cover it up with something like the heart shape below, {done with a margaret applin stencil i might add}: 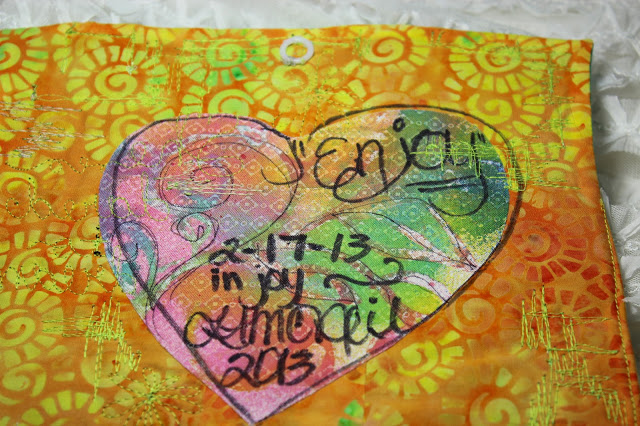 and… an amazing thing happened i want to share with you {this is a different quilt now}. i decided to add stitching, after i had sewn on the little plastic ring for hanging… {not smart}.  i was lucky; the needle did not break! amazing.  can you see the needle holes in the plastic ring?!!  wowzers. anyway… the plastic rings i purchase in the window supply section at the fabric store; they are 1/2″ size i believe. 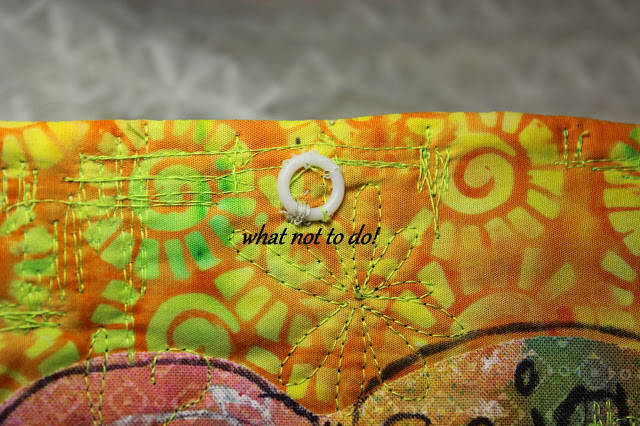 i usually like to add more quilting after finishing it this way, as it seems i’m better able to judge ‘what it needs’ at that juncture ~ if anything. and sometimes further inspiration strikes. i’ll show some of those details in the next post.  here’s how that same technique for faux piping turned out on the post: “she dared to dream” quilt:

i hope you enjoyed my little process. it’s pretty doggone easy {or i wouldn’t be doing it!} 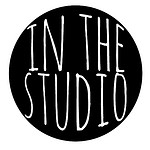 looking forward to sharing more?  i am!  joining in the studio crowd here!  won’t you join in the fun?

thanks so much for stopping in!  happy weekend!
xo
leslie