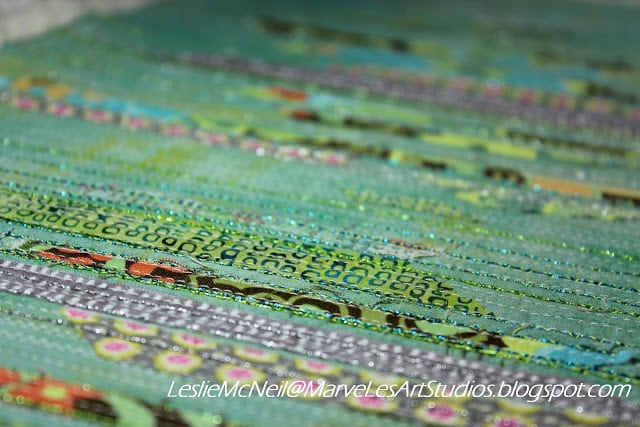 Today I want to show a new piece I designed last weekend.  I’m calling it “City Lights.” The base fabric is, once again, my stash of aqua “grunge” fabric from Basic Grey for Moda.  It came together almost by accident, as I was cleaning up in the studio. As I was folding up fabrics, I began to think about how some of them really were quite intriguing against this aqua color…

I dropped what I was doing {go figure}, and didn’t even take time to fuse these scraps to fusible.  I just decided to go for it, and audition those scraps, cutting them into narrow strips, and it started to look like a cityscape to me.  It kind of started with the grey and white print, which reminded me of a skyscraper… and then I saw the lime green modular batik print, and it looked like windows… and then other, more geographical prints, as well as the flowered ones.  When the flowered ones are cut up, they resemble foilage, trees, and greenery, against a backdrop of blue sky, or buildings, or well… your imagination!  And they are even more interesting in little slices… 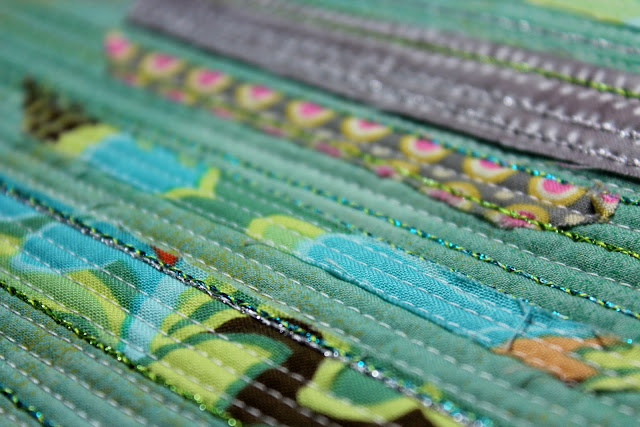 I pinned each strip, and then began to stitch them down with the white thread.  While I was doing that, I knew it ‘needed more’ and I thought how cool it would be to add a bit of silver Razzle, you know, like the sunlight streaming down on the shiny skyscraper buildings and reflecting?  And of course, why stop at just one?  I added lime green, and aqua Razzle Dazzle or YLI Candlelight threads to further add sparkle and shine. 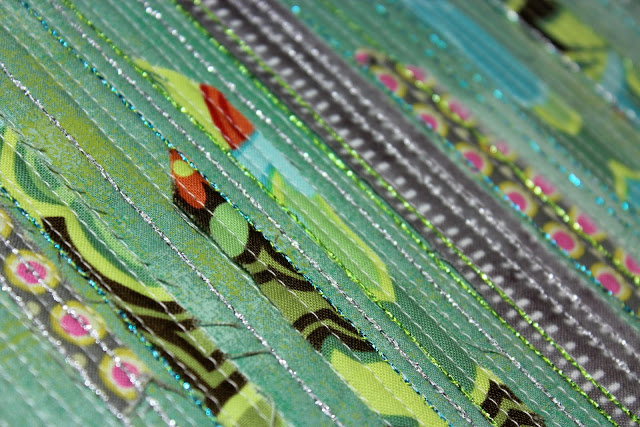 The picture above is the best rendering of true color of the piece.  Good light in the winter can be elusive in our house.  The picture below shows it hung on our living room wall, which faces the south, but it was a cloudy day outside, so there was not much light.  I’m sad that the sparkles and colors don’t both really show off, but hopefully, you get the idea.

It was designed it to be hung horizontally, and I wanted the left side edge to have the feeling of kind of ‘falling away’ into the distance as you leave the city {at least that is what I was going for}. I used two different fabrics for the binding, too, and deliberately placed the blue one on the curvy left edge.

And I also hung it vertically, to see how looked.  I prefer it horizontally I think.  The next day the sun came into the house, but it kind of washes it out, but you can see how it will really sparkle and shine for real! 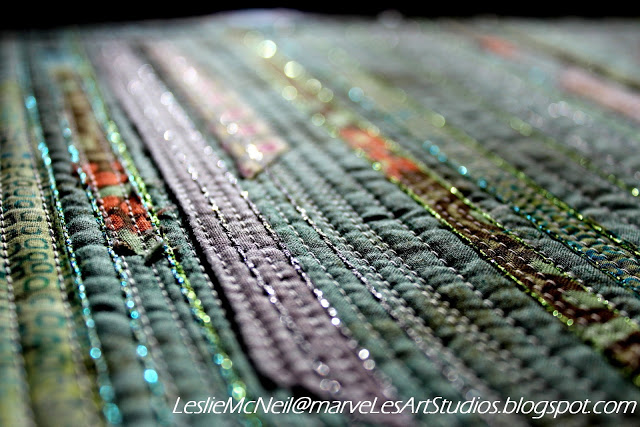 My Bernina 830 has a walking foot built into it; it’s called the ‘dual feed’ and it just flips down from the back of the machine, and attaches to any dual feed foot.  {these are marked as “D” feet in case you ever want to know}. I used my patchwork foot #37D for all the straight rows in white thread. 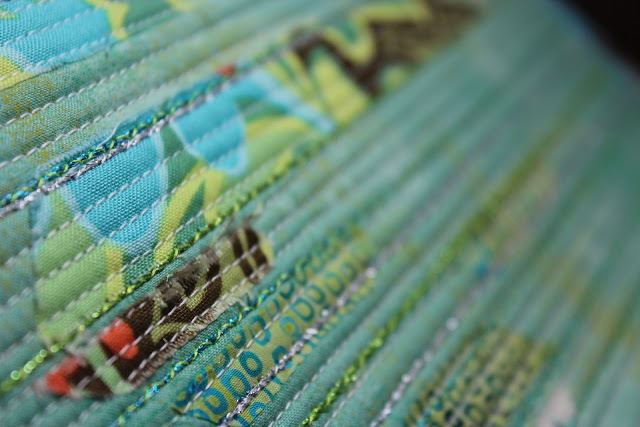 Rows upon rows of straight stitching, unevenly spaced apart, and parallel to each other.  Right up my alley. haha.  And the fabrics are fraying a little bit too… which also appeals to me.  If I do another one, though I may take some time and fuse, as it’s less hassle than pins. 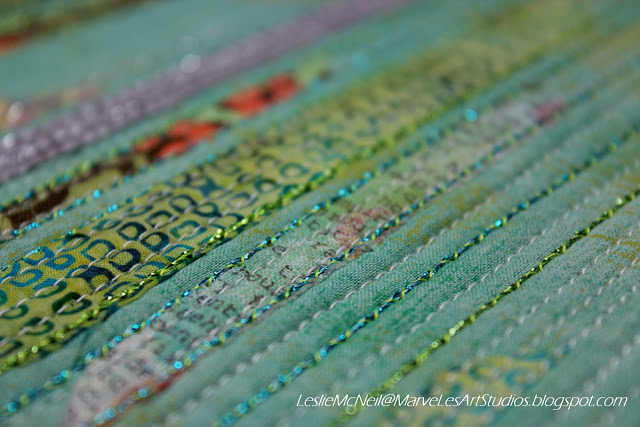 See that little slice of text print above?  That’s leftover from my stencil printing.  {cool!} And yes… I’m still lovin’ that lime green and turquoise together.  I deliberately left the green top thread on my machine as I couched the aqua thread down, using the Bernina #39 foot.  I just really dig that contrast.

I hope you‘re looking forward to a nice weekend.  Terri’s Blog Hop has sure been fun, huh!  I can’t wait to see what Vicki has to show us today!  There’s been such fabulous ideas for using them, you’re bound to find something that will surely appeal!

Thanks for stopping by; it’s been a great week!
JOINING my sweet blogger friend Jennifer at Studio JRU for her Friday “In the Studio!”
EnJOY!
XO
Leslie
Soli Deo Gloria!
Leslie says: