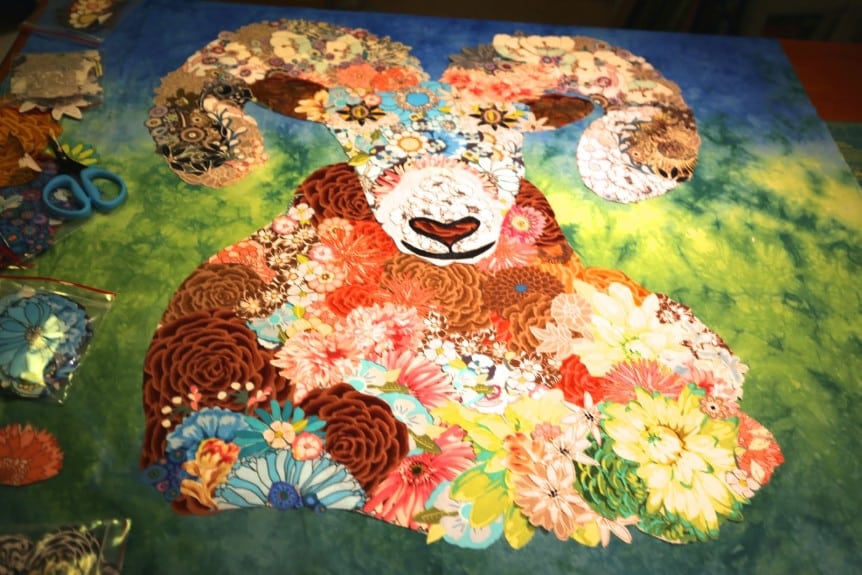 meet izaak.  the rocky mountain bighorn sheep.  big and bloomin’ he is!  that’s because he’s laying in a mountain meadow, enjoying the lush green grass of summer time livin’ ya know.

i came up with the name because a reader {thank you vickie} reminded me of a bible story; abraham, his son isaac, and the ram.  also, in glacier park, we have a classic old inn, named the izaak walton inn.  so there… lies the story of how he is named.  i loved the others, too.  “rosy ram,” “ram-beau” and “bloomin’ bighorn” were among my other favorites!  {you guys are so cool!}

so he went from this: 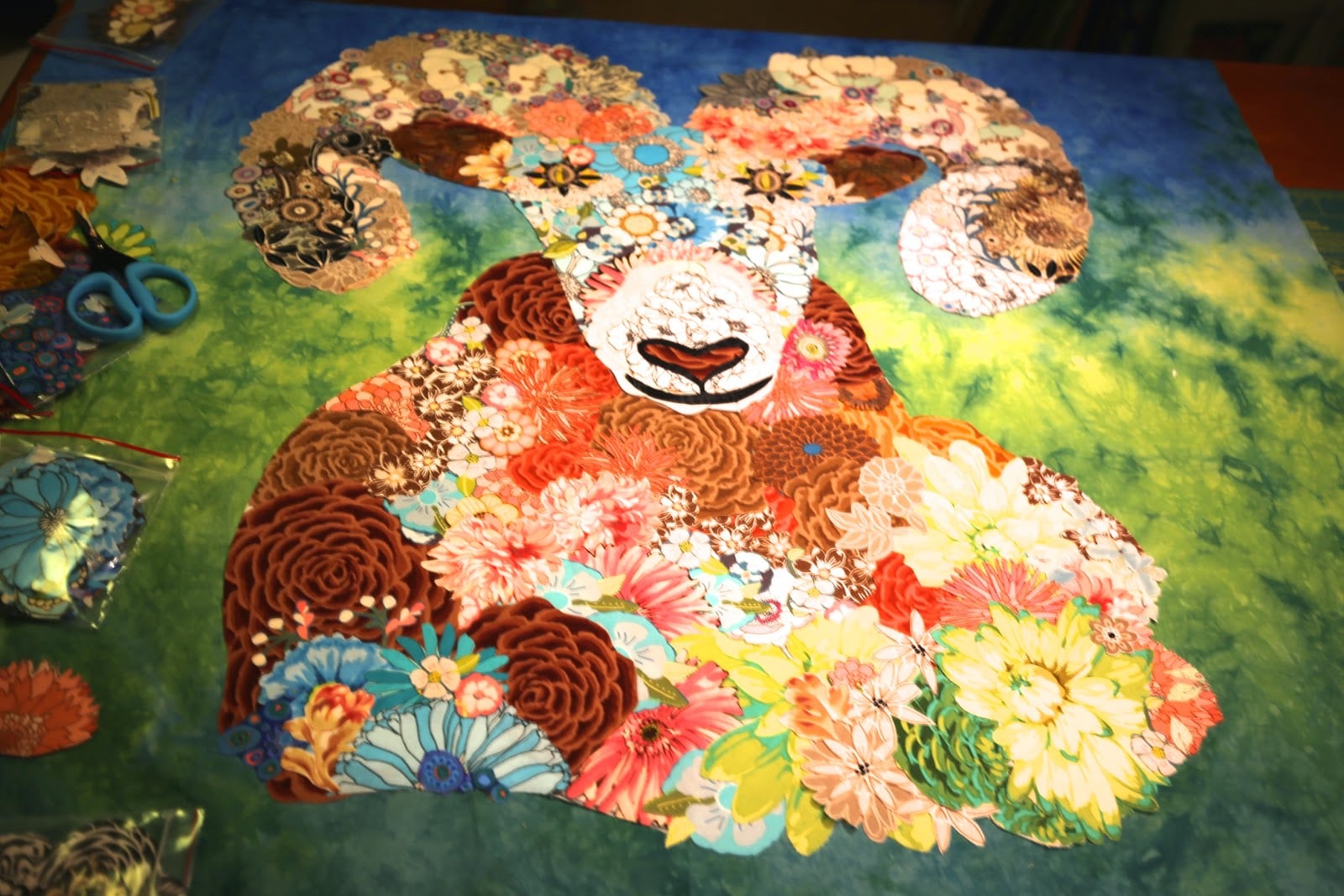 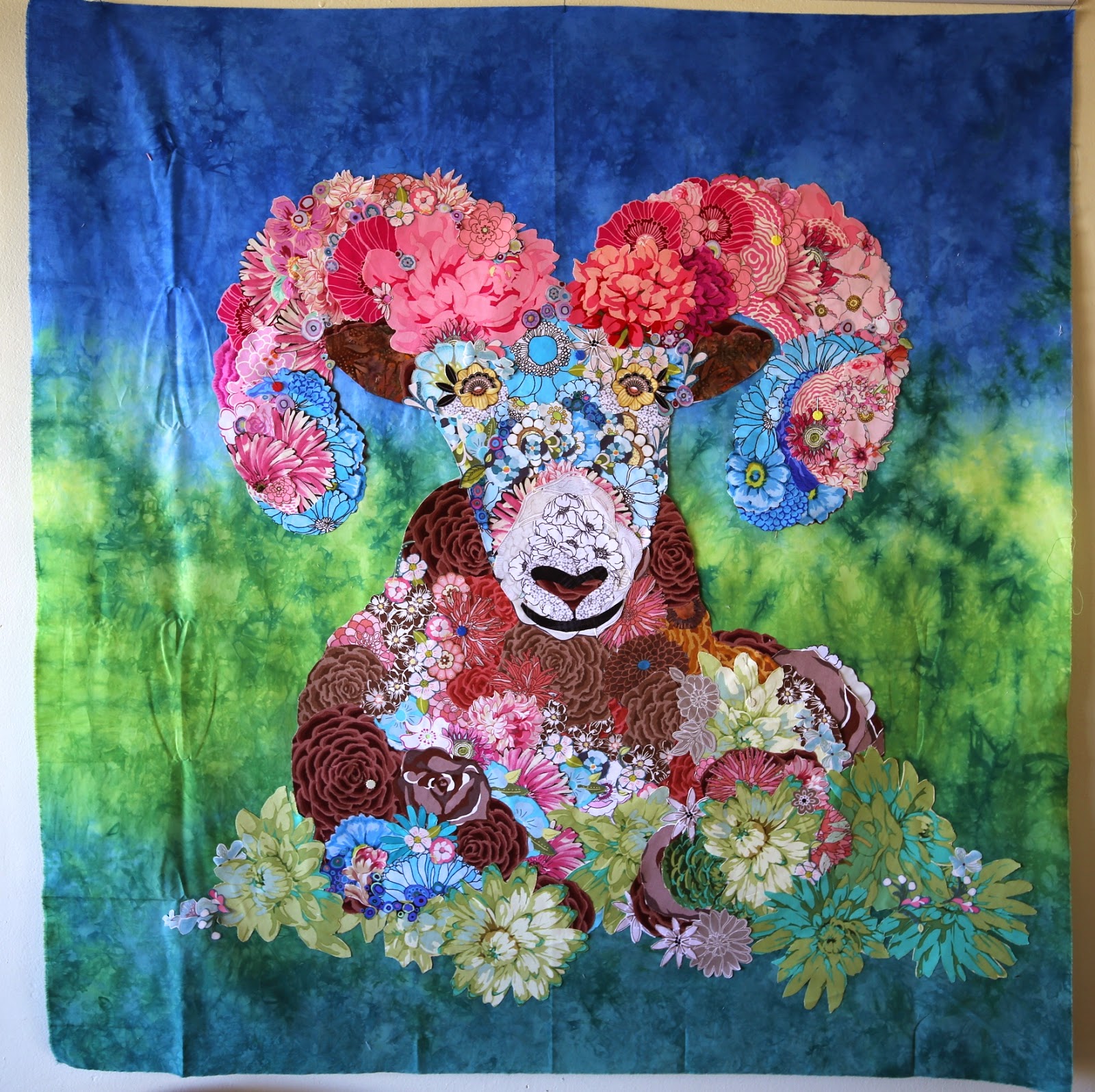 and other changes.  most of them subtle, but some not as much. the biggest one was the horn color contrast of the horns.  if i had more blue flowers i would have reversed their roles, and made the blue horns come out of the blue head.  {sounds kinda funny doesn’t it}  because pink is what i have the most of, that’s the choice i made for the larger areas of the horns.  the blue tips… well, i wish they showed better against the background, but i may finish them with a bit of dark thread around the edges to separate the imagery better. i could have used a different background fabric… but i wanted to use this one. {made by vicki welsh of course}. this is her thrive gradient. it’s beautiful isn’t it.  big blue skies… lush meadows… perfect!

notice too, that i covered up the large blue flower in his forehead?  i found it distracted from the face and eyes.  so i covered it with another blue flower, taking out the most graphic ‘eye-catching’ of the first blue flower.

and i changed the eyes.  i cut out some of those multi-petaled black flowers.  i like them on the side better. and i also angled them ever so slightly, as well as added thread play in a small rectangle in the eye’s center.

i also added bits of the darker blue millifiori flower circles to the face to {hopefully} emphasize curvature of the head, and shadow illusions. these are the same ones added into the horn structure, and the totality of their use brings a bit of cohesiveness to the whole design.  {i also added them into the foreground flowers, that’s he laying in}. 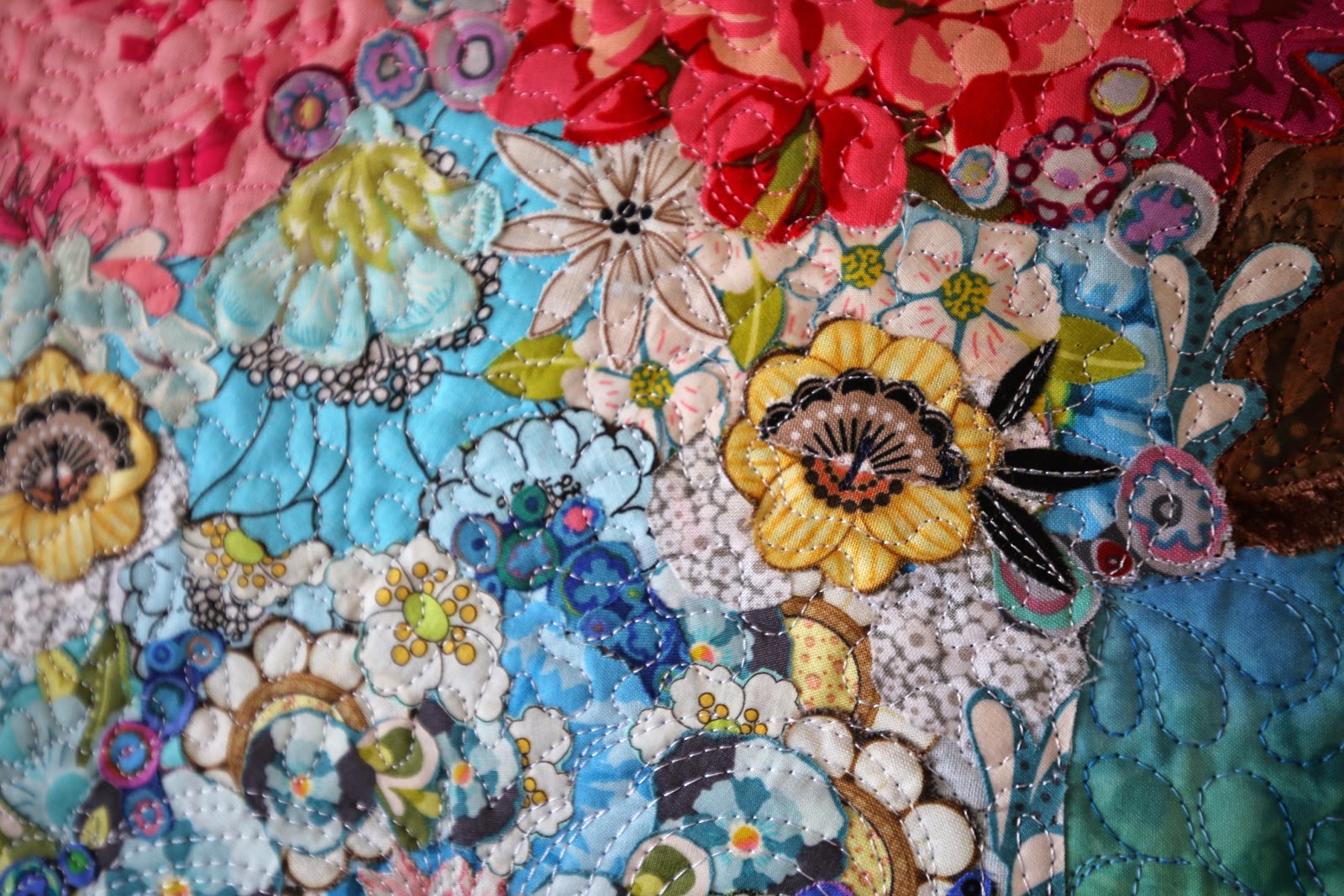 and i cut the nose ~ the brown part {the shadow} down slightly, too.  i like the lines i quilted into the nose area, emulating some of the curvature of his nose. 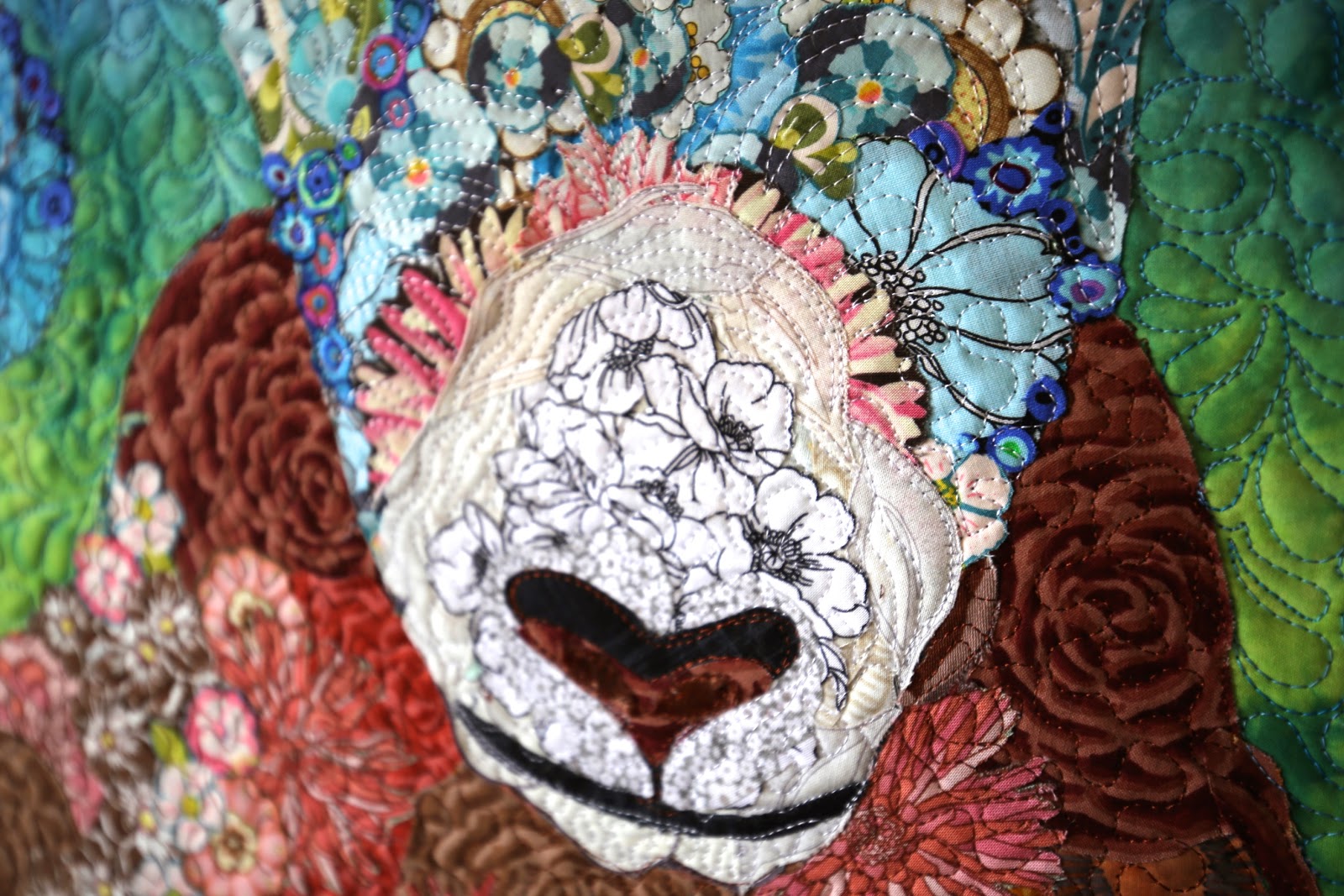 notice the pink flowers just above the white nose section?  to me, they speak to fur, and texture, but also to separation of the major face features of the sheep, defining and setting apart the white nose: 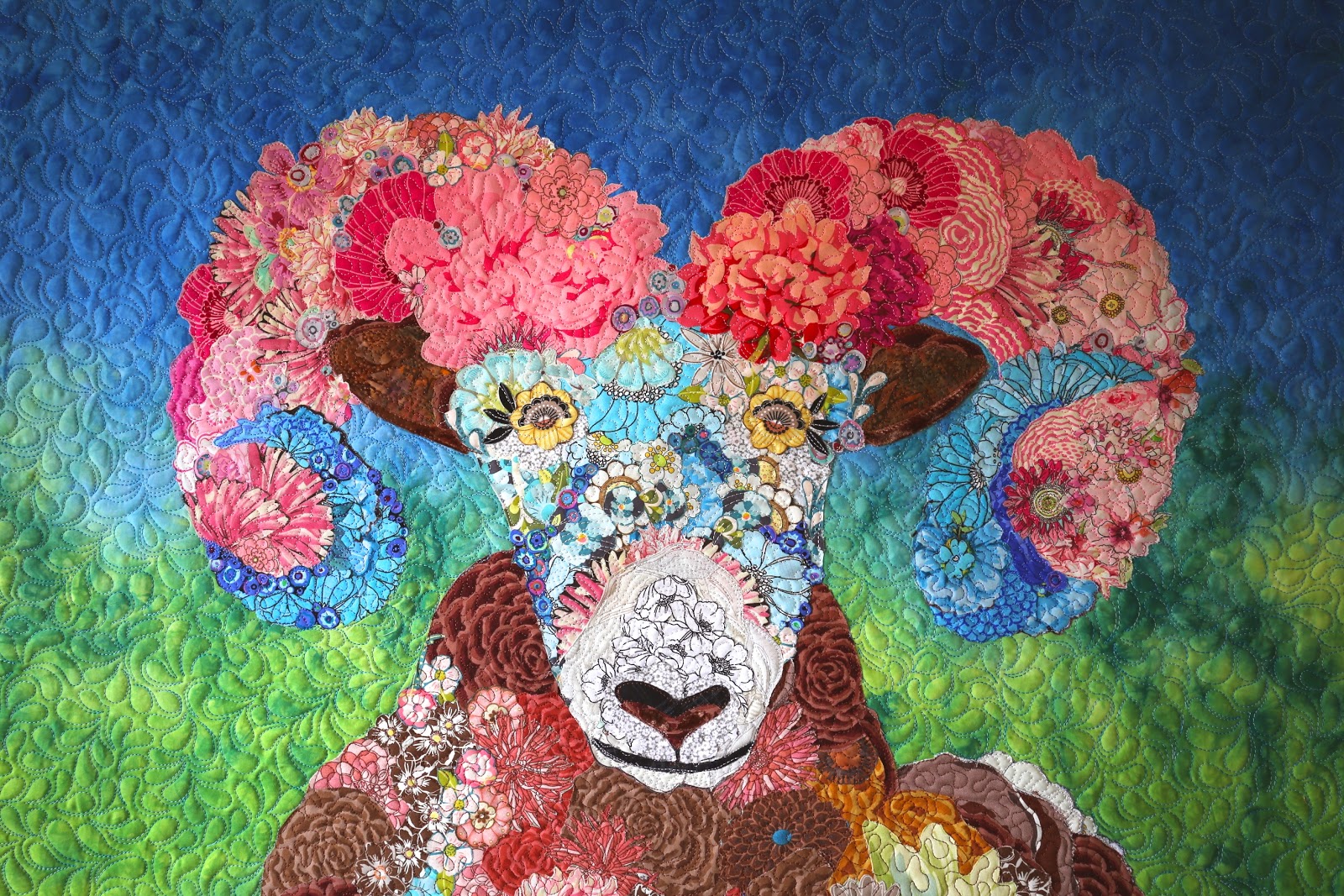 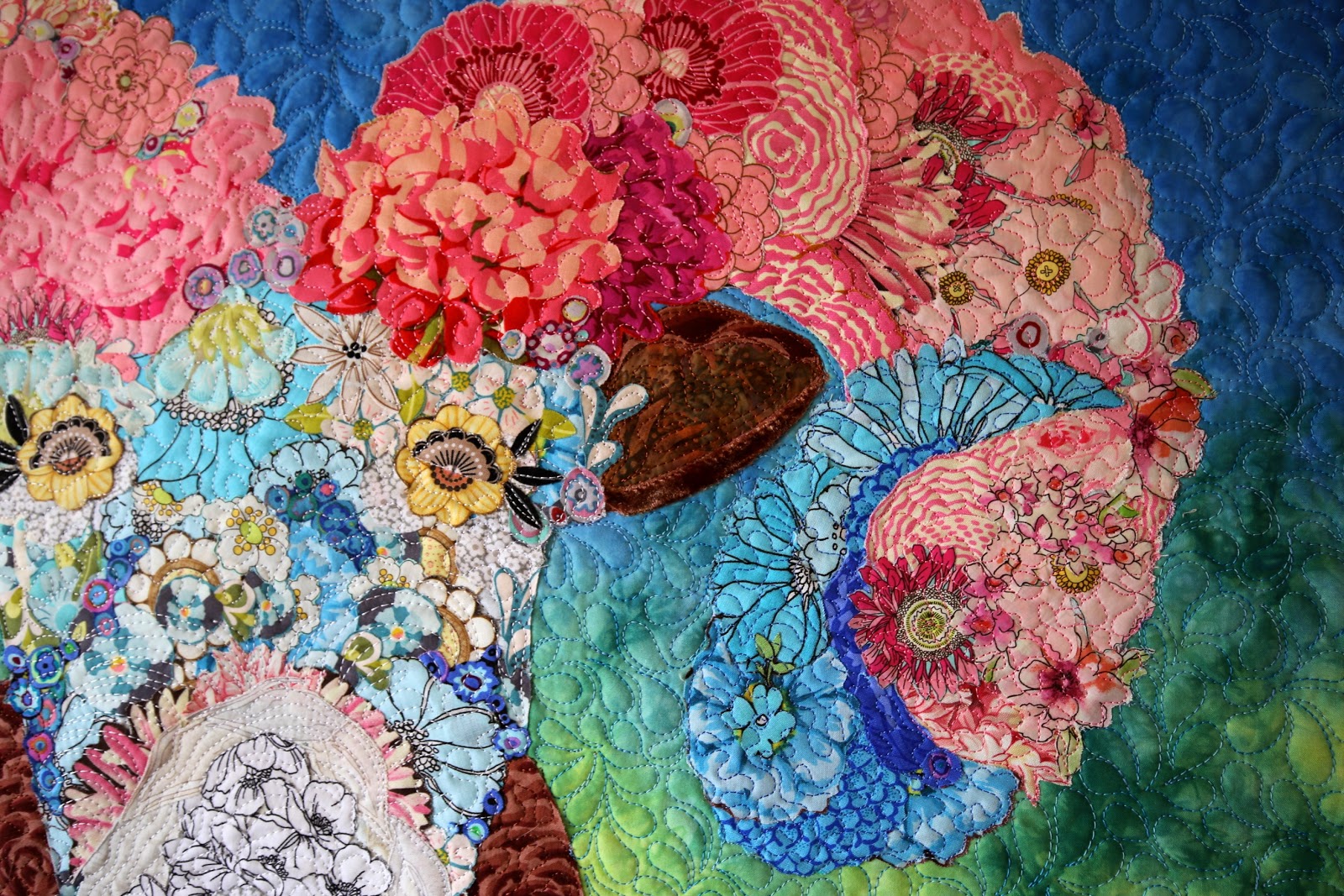 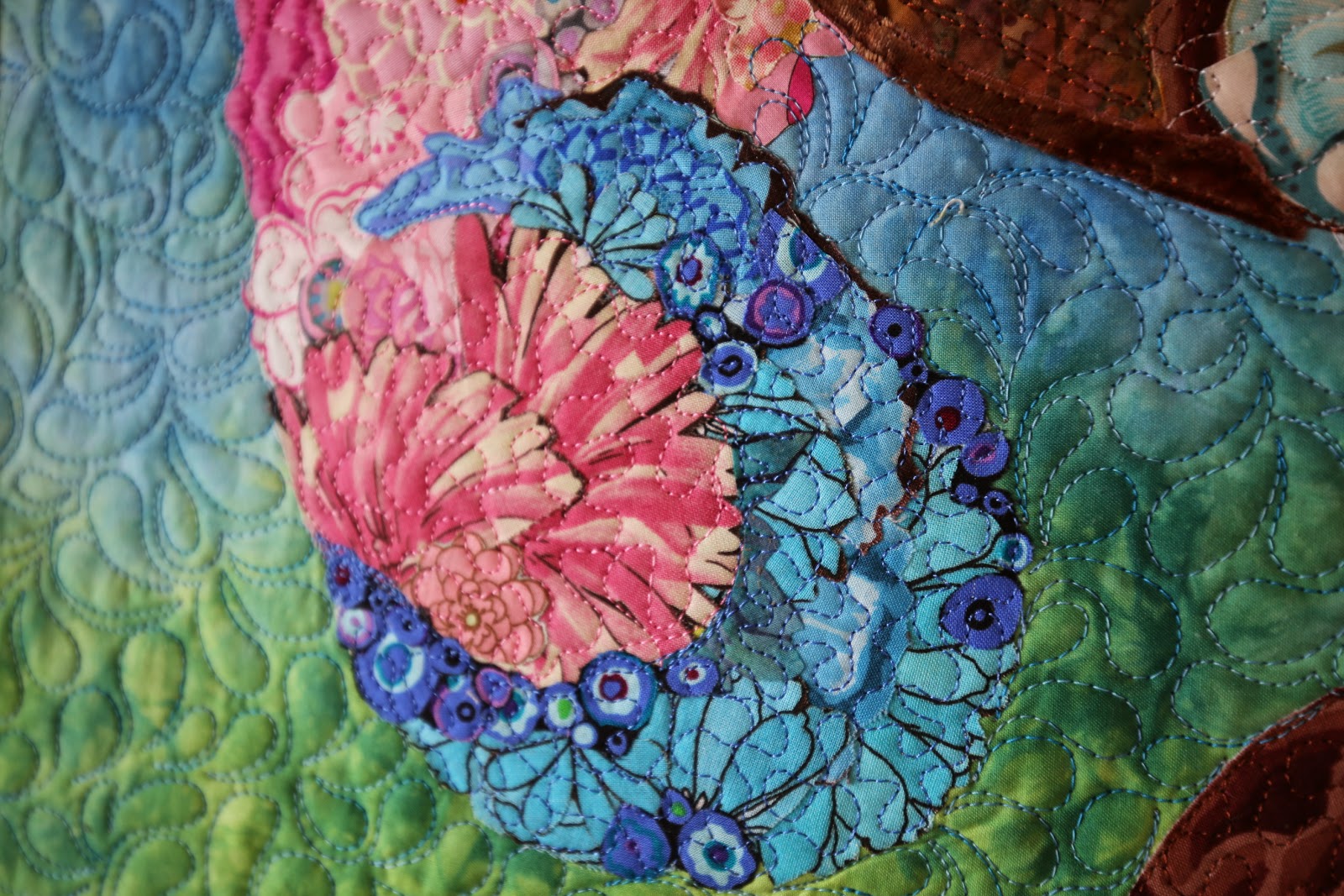 i added a hint of white butt on him, too.  even though he’s laying down…and one may not see it clearly, i decided that’s just part of my creative decision making! 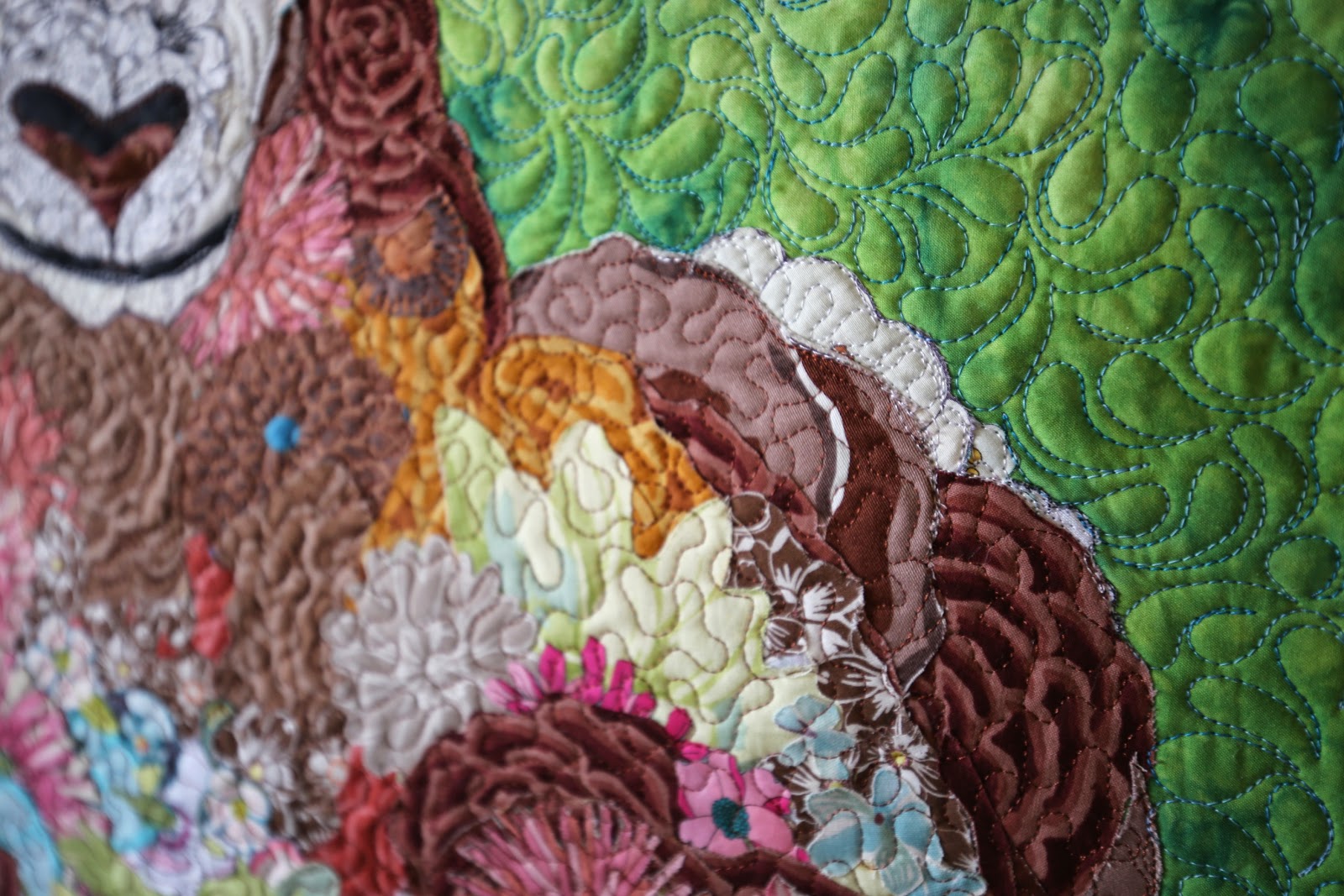 here are some of the details of the flowers that are in the foreground. 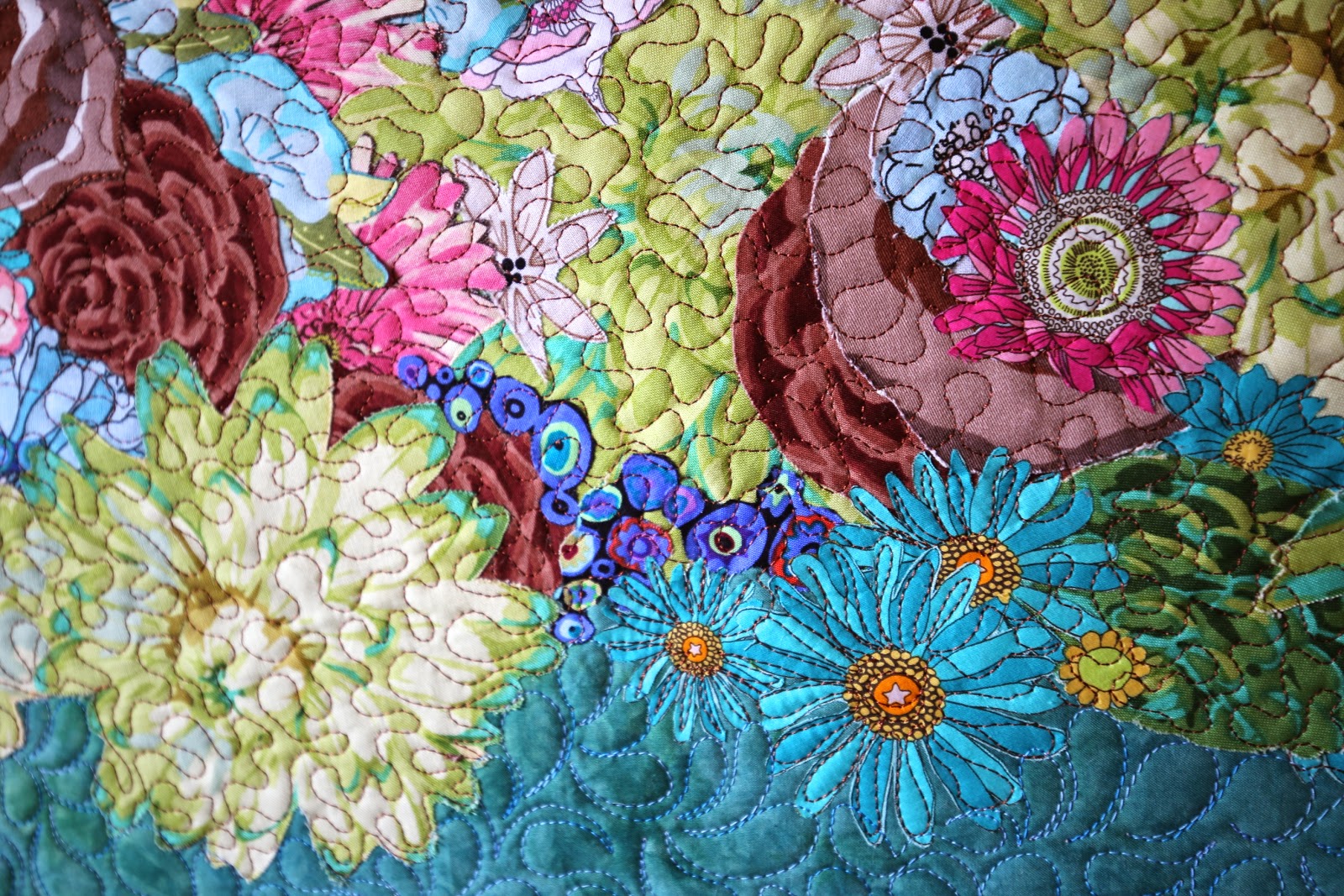 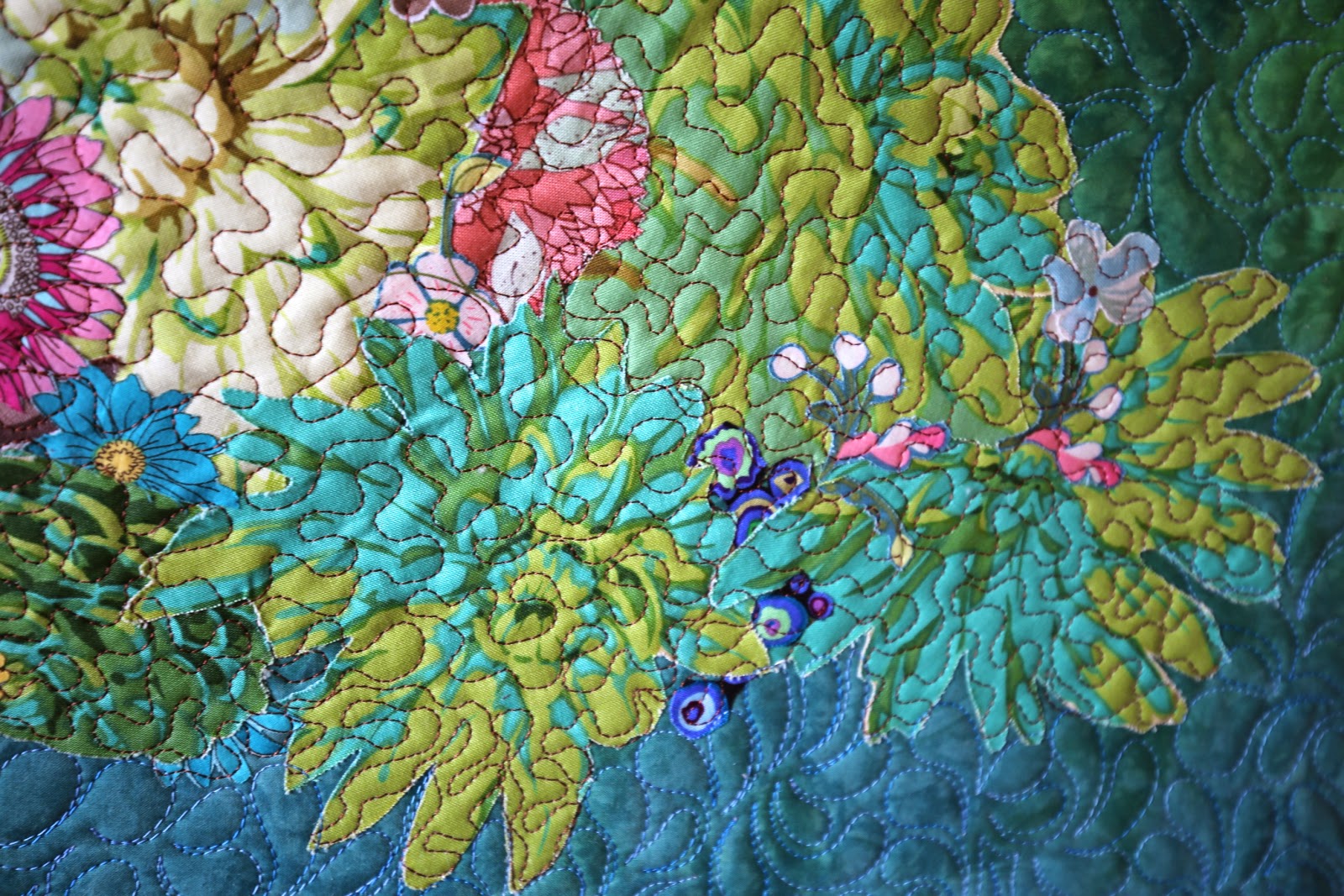 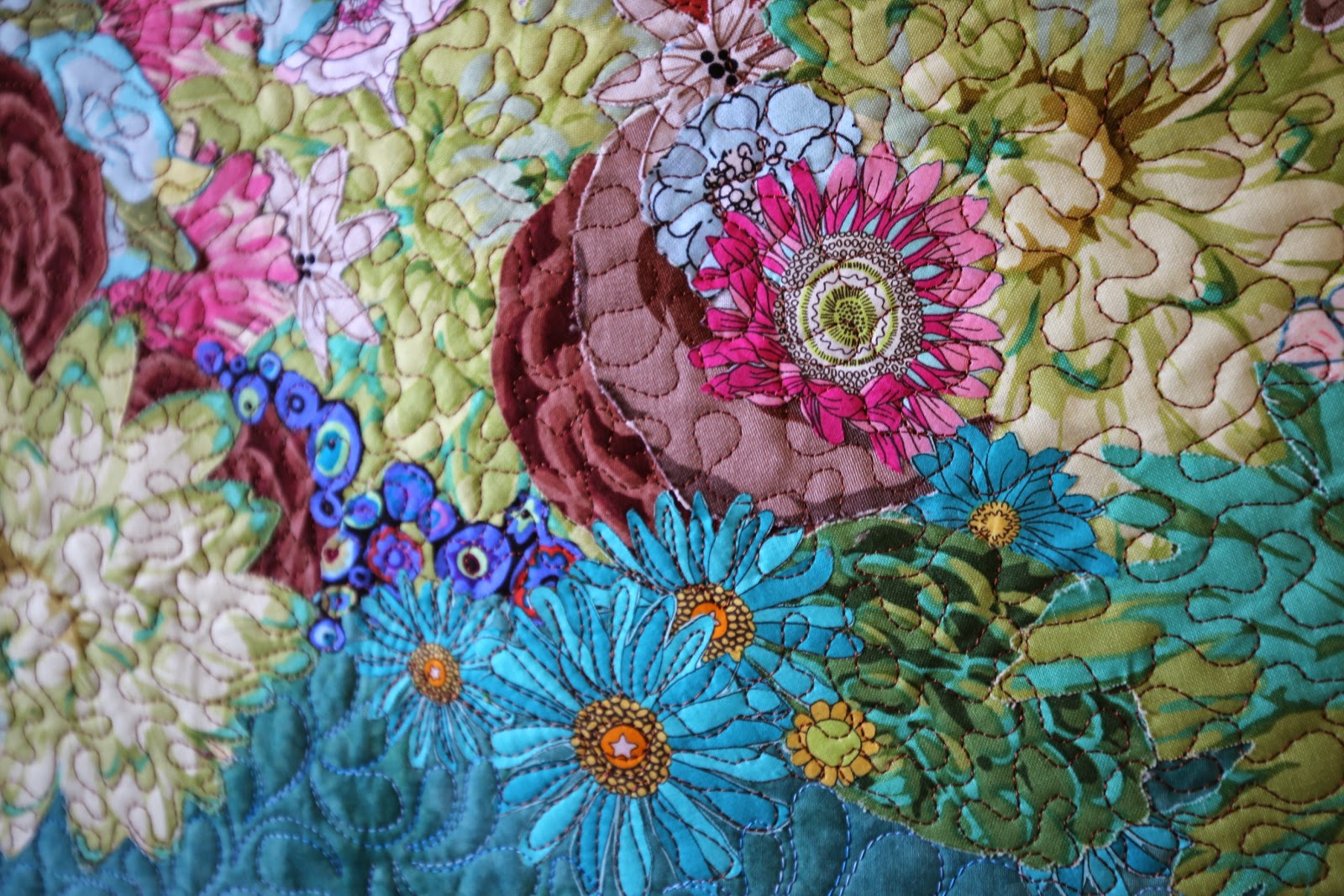 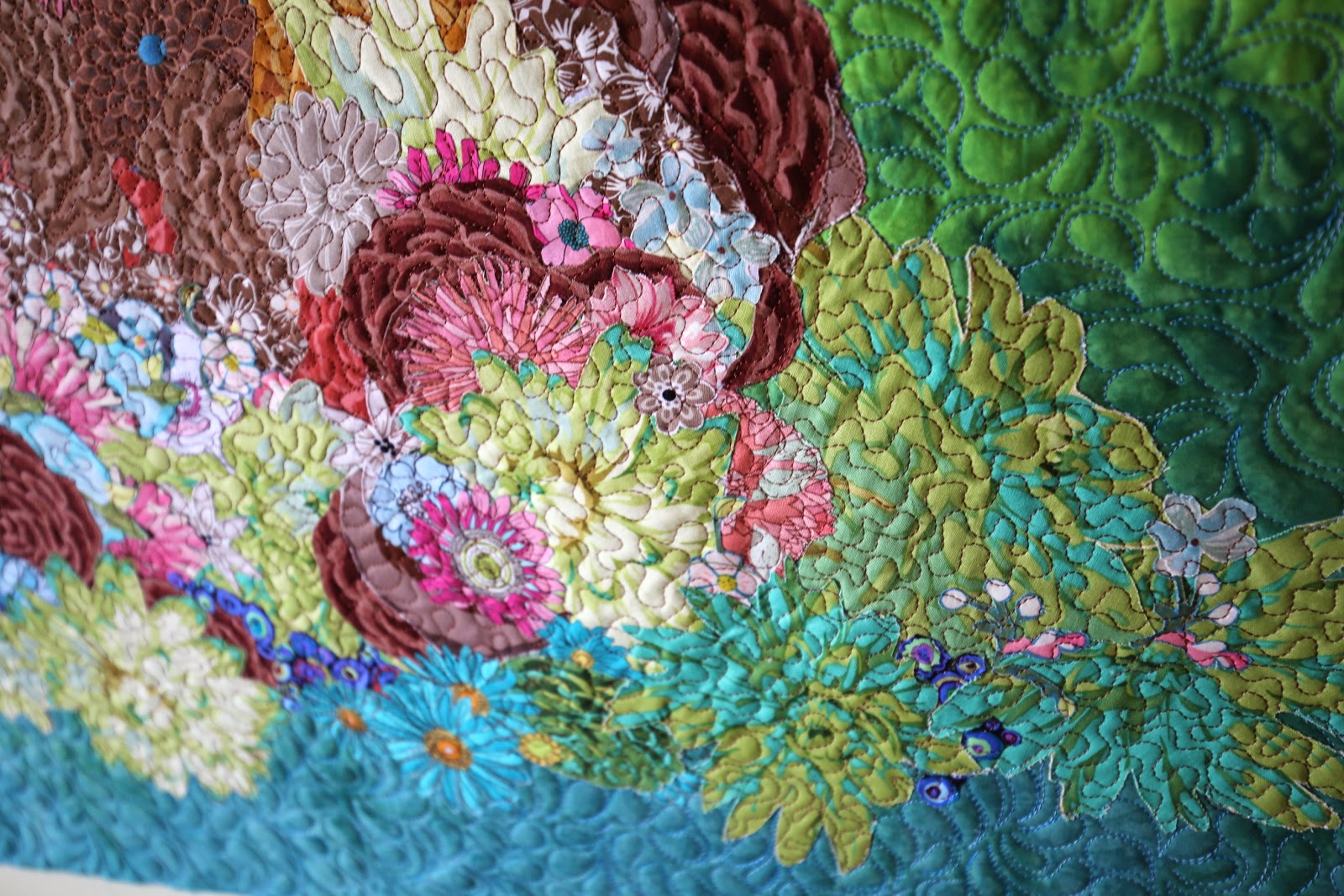 and these are the color choices and thread types i chose to quilt mr. izaak.  by far, magnifico {by superior threads}, which is 100% polyester, 40 wt thread, is the easiest to quilt with. no fraying, smooth quilting, and it has no trouble going through all the thick layers of fabric and fusible.  at times… there are probably 7-8 layers of all of those, including batting and backing!

i also used masterpiece {the gray} 100% cotton, 50 wt in the bottom.  i used the blue magnifico in the blue part of horns, the same for the pink, and brown for the body, as well as white for the nose, etc.  and a must have, is superior’s titanium coated, 90/14 topstitch needle.  it’s certainly my dream team!  i’ve used several other types of thread now in my collages, and by far, there is no comparison as to ease in quilting. 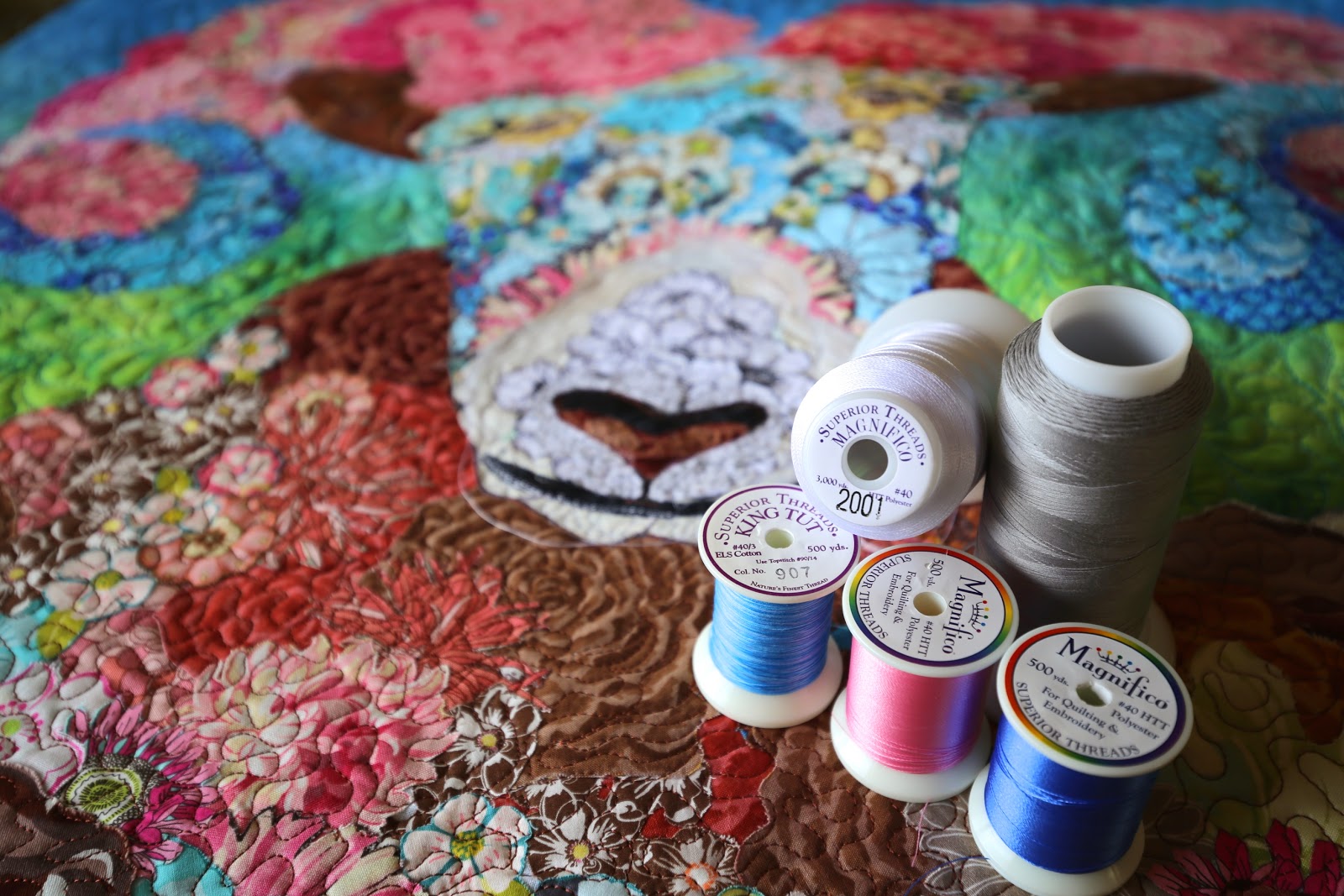 after much debate in my mind, i decided on a curvy two sided cut for the outer edge.  i’m ready now to make some modifications to my initial pattern, get it printed, photographed, and ready for packaging.  it will be listed in my etsy shop, soon! 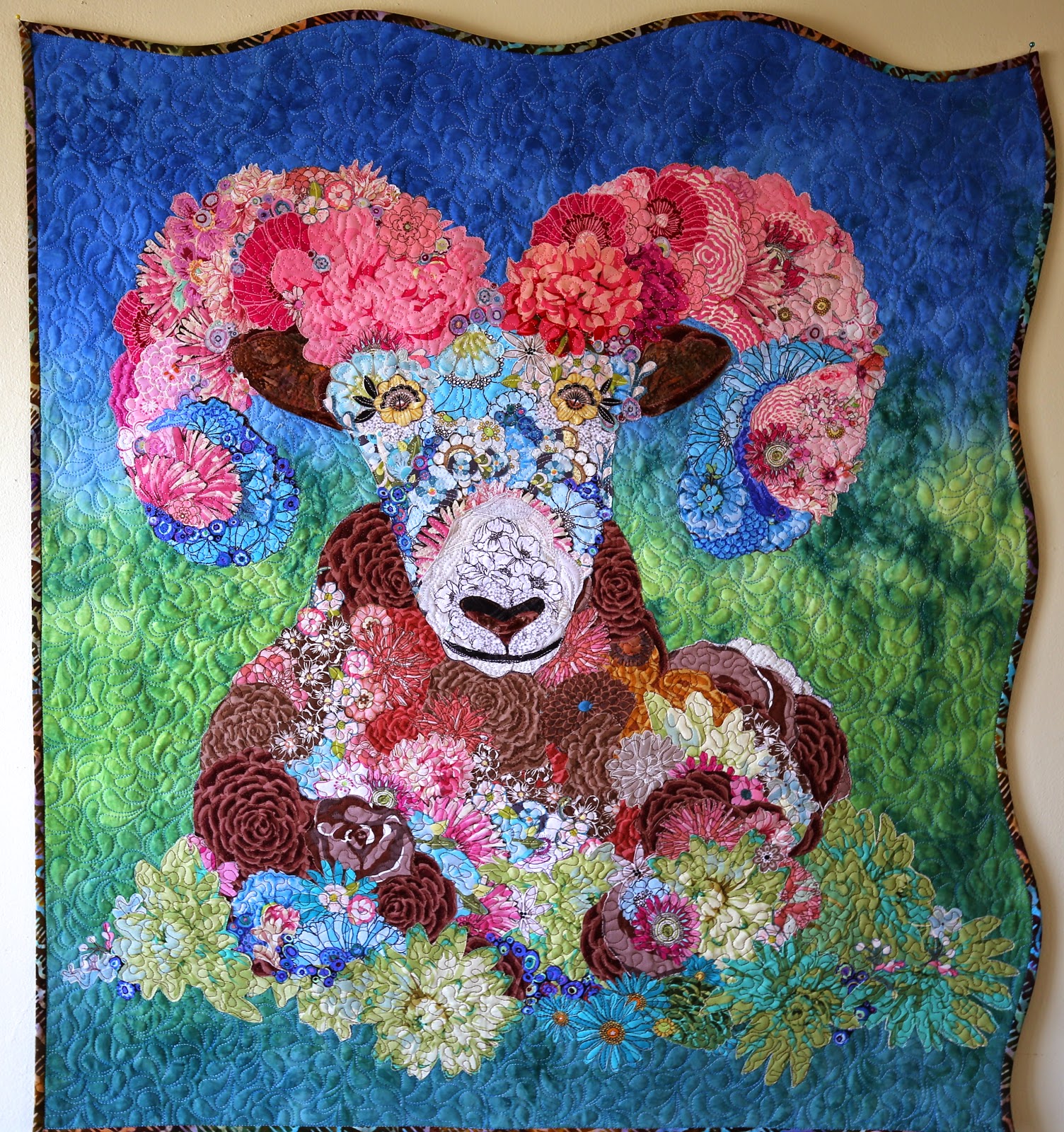 if you like mr. izaak ~ and would like to try making one from my pattern… just leave a shout out on this post.  when i get the pattern printed up {hopefully by next week  i’ll send the pattern to a lucky reader, free!   i’ll pick the winner next friday, march 20th.

also, i’ve been asked quite a lot for a pattern for the table runners, mug rugs, toppers… so i will be developing that more completely, as well.  wahoo!  and i’ll be announcing the facebook winner of the “rocky” pattern, next monday!

another fun and full weekend of collage class coming up!  i’m ready!!!

thanks for following along my process… my craziness for collage!!