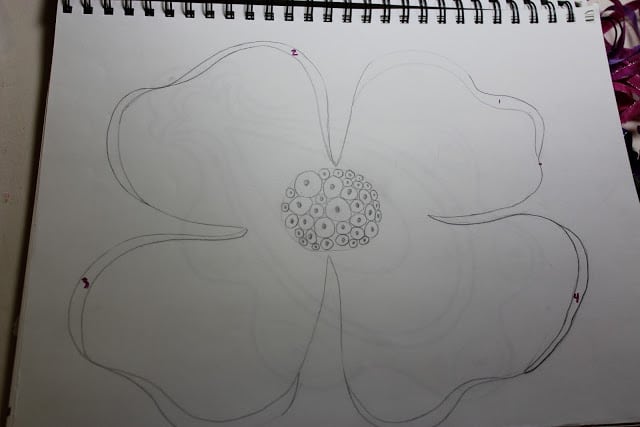 It was a stormy spring, that spring of 2010.  And that rainy season became my personal inspiration for many things that year.   To begin, I wanted to make a  drawing that would be suitable to turn into a pattern and become ‘the big picture’ so to speak! To see if it would ‘bloom’ … into a quilt.

That spring I was also home, recuperating from my first-ever surgery that June.  And I was limited in mobility, so sketching was a good thing… as it rained and poured… and poured and rained!

Much later that summer, I was able to use the fabric that is the blue background — one of my first-ever hand painted fabrics, using Jacquard’s Dye-na-flow paint-dyes.  I was quite pleased with the deep, multi-layered colors of periwinkle, royal and lavender-oriented blues that glow in this fabric, setting a definite tone of the stormy skies I was constantly seeing.

I applied bobbin play, from the backside of the quilt, but not until I had outlined the flower first, (see my explanation below).  I used Razzle Dazzle (Superior Threads); in a wonderfully thick and glitzy navy metallic thread, and once those ‘jagged’ sharp pointed lines (the pounding rain) were quilted, I turned it over, and finished the quilting from the front side of the quilt with variegated thread – two colors only; again in purples and moody blues.

I kept the quilting lines deliberately sharp and pointy, to heighten the stormy feeling, and to emulate the pounding rain. I alternated the quilting within these two sections from straight and narrow points, to soft and undulating lines.  Driving rain… and soft, misty rain. 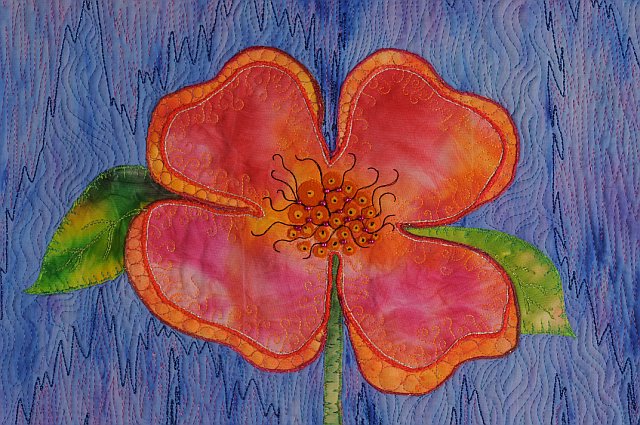 The pink and mango-colored flower (also hand painted fabrics of mine) were fused to the blue fabric, first, after tracing from my sketch (and reversing!)
It’s portrayal is very much symbolic of my recovery period, of ‘standing tall’ – in a ‘survivor mode’ if you will… despite the gloomy spring weather, posing in a bed of spring flowers in the pounding, cool weather. Persevering, being content, despite the storms. 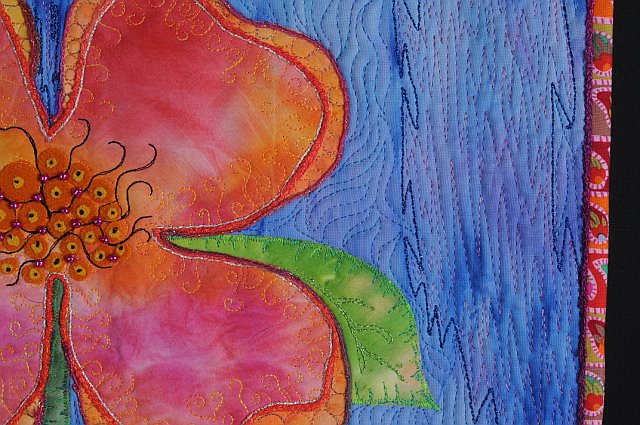 I hand-cut a bunch of wool circles, fusing them on, and added little yellow circles, and then a french knot in a black thread.  Beads were sewn on by hand, but not before the black lines of the stamens were quilted first. 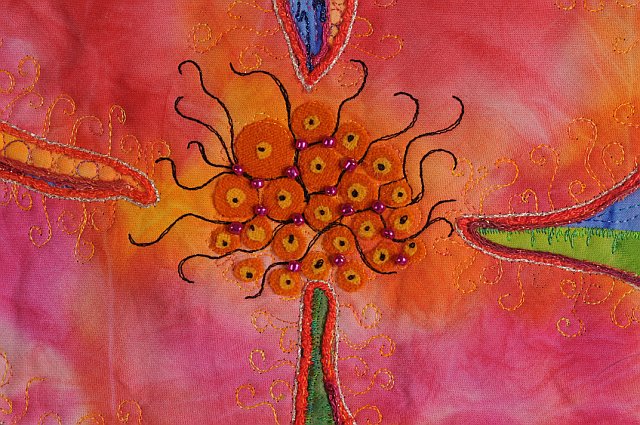 Once that was accomplished, I added an additional visual element of with silver  Razzle Dazzle, just inside that yarn border, using my Bernina #39 clear embroidery foot, which is a traditional couching foot and allows for exact placement.  I added free motion applique stitching from the petals, going in soft curley-q’s from the petal’s edges, and also in and among the center of the flower’s small woolen circles, in a soft, swirly line as the stamens of the flower. Love the black drama and visual interest this brings to the center of the flower.  I see it as beckoning, as if to say “come – take a closer look!” 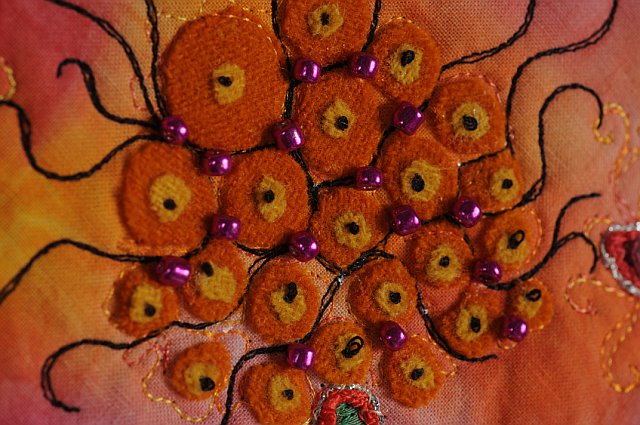 The pink beads were hand sewn on this time.  Love the pinky-purple tone with the peachy-pink of the flower! 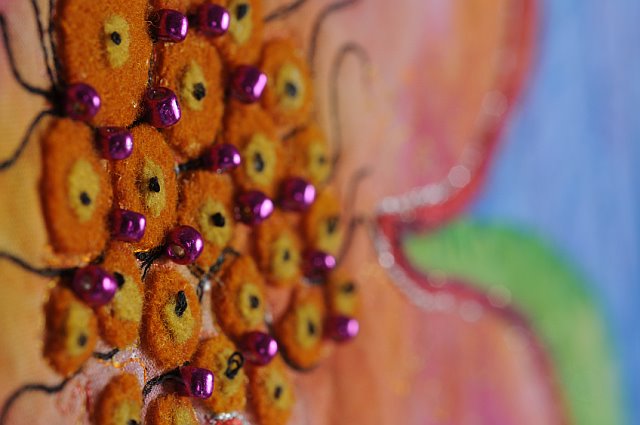 The beads lend themselves, ever so slightly, to a rain-shiny look.  I also free motion stitched, using my favorite #29 clear foot, around the little woolen circles, to help them ‘pop up’ just a bit, using an orangey-yellow color of thread so it would not show too much. 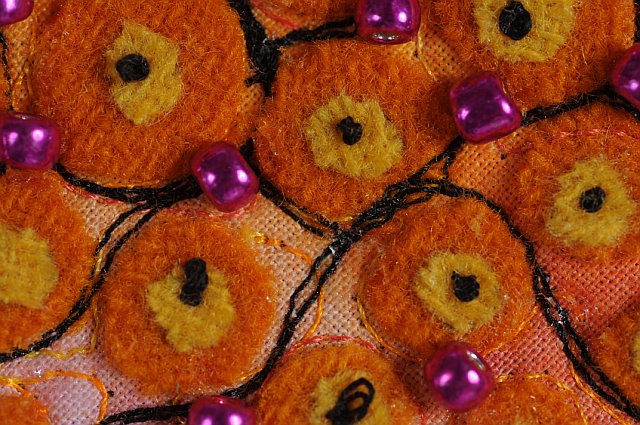 The picture below, reminds me of how excited I was to add the angelina – both fibers and textiva film.  This was the perfect touch in my eyes, to emulate the rainy puddles that seemed to fill up my garden flower beds… and I was delighted with this look.  It’s so easy (and really fun) to do – I pulled angelina fibers out of the package, chopped up some angelina/textiva film, and then fused them using my teflon sheets.  I laid them on to of the fused grass blades, and then added free motion couching with more yarn to add texture for the green lawn, and the blades look (to me anyway) like they are really wet.

Little white flowers in a satin fabric, cut into heart shapes were added after the angelina, and the flowers have yellow wool centers with black stamens free motion quilted. 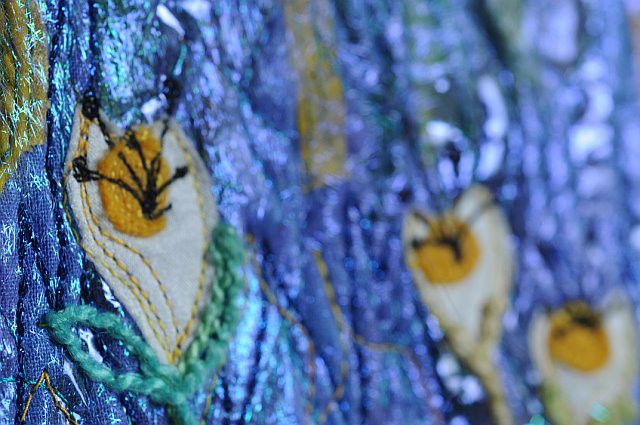 Smaller red flowers and their petals have a gathered and ‘puffed’ look, using a product from Superior Threads called “Texture Magic.”  I free motioned willy-nilly (an official term you know) all over the fabric, with the Texture Magic product on the backside, and then steamed it with my iron until it wrinkled and puckered, til it was done doing ‘it’s thing.’  I then added fusible web, and lightly steamed them onto the quilt, too, adding couching in a red yarn… some silver thread play.  Done! 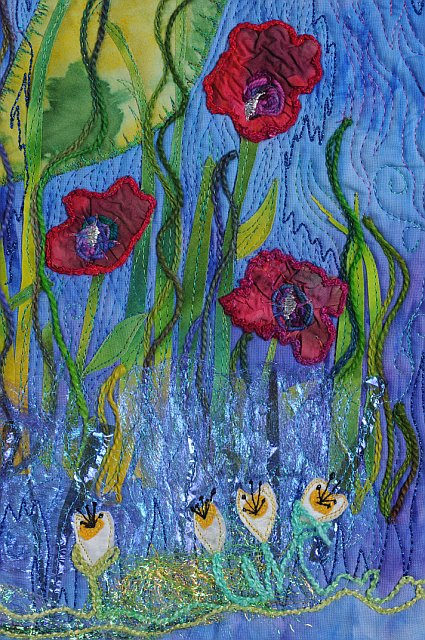 And if you look closely at the binding in photo (Picture #3), you can see that the binding features a lovely hand-dyed yarn which was couched, again, using my #43 free motion couching foot, right into the ‘ditch’ of the binding.  This, in my humble opinion, creates a professional and ‘framed’ finish for this contemporary art piece.
Just goes to show what the ‘storms of life’ can produce in us!
Soli Deo Gloria!
Leslie says: