When I was “cleaning” my studio a few weekends ago, I found this small, unfinished, wall hanging top.  It got tossed onto “The Pile” two Christmas seasons ago.

At that time, I was not crazy about it ~ that’s why it ended up in “The Pile” in the first place!

I had painstakingly traced the letters onto a large square piece of freezer paper, cut them out with an exacto knife, and then adhered the paper onto the fabric with the iron.  I began to fill in the blank letter spaces with a red painstik, and then highlighted the letters with black.

One of the reasons I’m not crazy about this piece is that the letters aren’t ‘straight’ – or aligned within the body of the rectangle, and I don’t know … it’s just rather “kinda” quirky-slanted, instead of ALL OUT quirky-slanted?!

Do you know what I mean?

Also, since it is shaded with black, which looks fine in and of itself {I guess}…  I just don’t personally care for it, frankly. 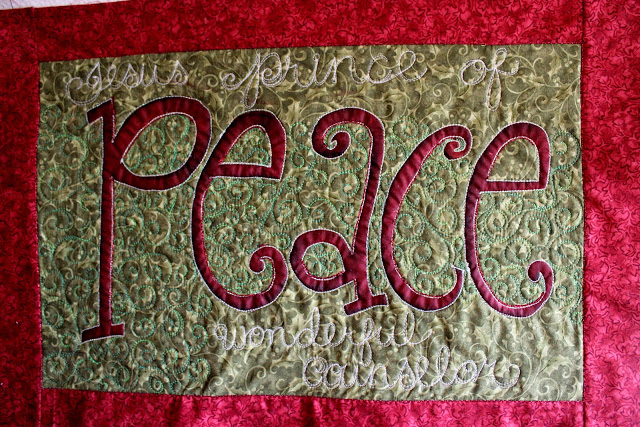 Nonetheless!  I am trying to be discliplined, {yeah, ok} when it comes to cleaning things up a bit… so here I go.

I began quilting it with a lighter green thread – this happens to be YLI Variations.  I was hoping it would brighten up the olive green… and the answer is… well, not that much, as it turns out. 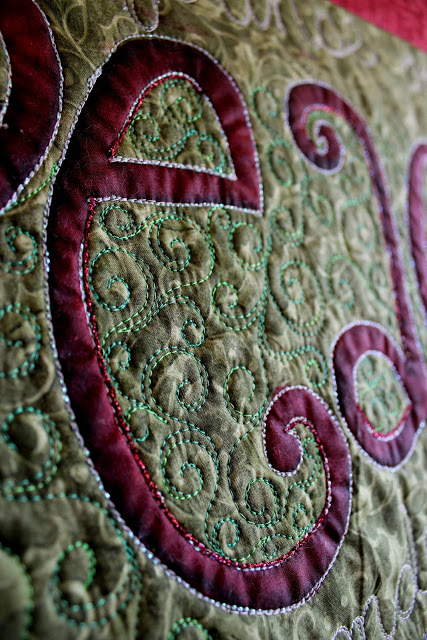 I have also decided to add emphasis to the letters, and brighten them up, first by stitching around the edges in white King Tut thread.  Ahem… yeah, that was just okay.

So I decided to add Superior Threads Razzle Dazzle in a white iridiscent color, in my bobbin, stitching from the back of the quilt, following the previous line of stitching when I outlined the letters.  Problem is, I missed in spots. so that initial stitching with white thread has to be removed… {ugh}.

Then… I made another decision to add red Razzle using my Bernina #39 foot, further attempting to highlight – to add pizazz.  It’s got mixed results in my opinon.  While it did add some pizazz… it’s kinda messy.  I don’t care of it that much.

I doggedly continued on in my little disciplinary action… adding some other quilting in white King Tut, with the words “Jesus Prince of Peace” and “Wonderful Counselor.”  I love the writing, {and the truth of it!} … but I’m not crazy about how that doesn’t really show up either.

So I am determined to finish… will continue quilting with the green YLI variations.  I don’t know, it may be an exercise in futility, but at least I will know whether the gamble was worth the time and effort, or … I will just use it as a class sample of what … NOT… to do!

That is where it stands.  Sometimes … things just don’t go as planned! I’m okay with that.  It’s still fun to explore, and hey … just like that fisherman saying… “a bad day fishing is  still a good day”  … same goes for quilting!

I’ll keep you posted on my progress, and hopefully… show you a finished project, soon!

Hope you’re having a good day… fishing ~ or quilting~!
P.S. I am editing photos for my “Grip n Stitch” giveaway… come back soon, ya hear?!